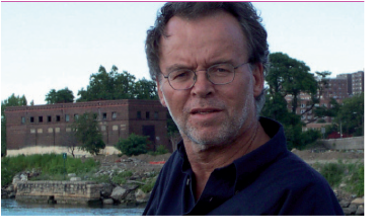 Helmut Dubiel was born in Essen in 1946 and studied philosophy and German literature at the universities of Bielefeld and Bochum. He has traveled extensively and held visiting and guest professorships at the University of California, Berkeley, New York University, and the University of Florence, Italy, among others. He is now professor of sociology at the University of Giessen. In 1982, at the age of forty-six, he was diagnosed with Parkinson’s disease. He lives in Frankfurt.

About Deep in the Brain

In this fascinating book, Helmut Dubiel describes the course of his illness with a philosopher’s aplomb, ennobling his personal experience with intellectual flair and scientific insight as he makes connections between his own medical drama and some of today’s most significant global tendencies.

Above all, Deep In the Brain describes a battle: the battle between the inclination to give up, to view oneself as dead to the world, and the force necessary to reinvent oneself and rise above one’s illness. Devoid of self-pity, Dubiel vanquishes his illness by using it as a source of philosophical reflection on the twofold nature of modern medicine, the meaning of success and acceptance, and the true nature of that capricious creature we call “I.”

Helmut Dubiel
Deep In the Brain.
Living with Parkinson’s Disease

When I arrived in Frank­furt the next morning, shattered and poorly rested, my legs buckled underneath me on the platform. The emer­gency doctor had me admitted to a hospital for a neuro­logical examination.

That same morning an intake interview was conducted at the Frankfurt University Clinic; I recall only fragments of this. The admitting physician was a young and appar­ently newly licensed doctor who limited himself for the most part to reading off questions from pre-printed mate­rials. He recorded my answers with scrupulous care on a notepad adorned with the familiar Goethe logo of Frank­furt University. When he came to the questions about hereditary diseases in the family, he inquired specifically and in detail regarding any occurrence of Parkinson’s. I had read enough about neurological diseases in the mean­time to understand that the question he posed with such determination actually already represented the answer to the only question that worried me. For about a year I had been making a habit of browsing medical dictionaries in bookstores, libraries, and the relevant sections of depart­ment stores. Just the day before, I had come across a pop­ular introduction to neurological diseases in a Viennese bookstore. My hands were shaking as I replaced the book on the shelf after reading an exact description of my symp­toms under the rubric of Parkinson’s Disease.

I immediately broke out in tears and started talking some kind of nonsense about my young girlfriend in Vienna, simply to show the young man the vastness of my despair. I told him that if his question was meant to imply that I suffered from the disease, he was wrong. After all, I was well informed about the symptomatology of Parkin­son’s. As I struggled to regain my composure, I told him that several months before, on the advice of my orthope­dist, I had consulted a neurologist in private practice who found nothing. Of course, that was only partially true. The whole truth was that the neurologist found extremely poor nerve conduction in the left side of the body three times in succession—a finding which, as I later learned, is an indi­cation of Parkinson’s. The neurologist had terminated the examination because he believed that the consistently extremely low readings were a sign that his equipment was defective. But perhaps he was also simply a sagacious man who wanted to spare me the truth for just a little while longer. Today, it seems more likely to me that he in fact knew exactly what the low nerve conduction results indi­cated. But even neurologists can show sensitivity. He didn’t want to spoil the weekend, not only for me but also for himself.

The young neurologist at the Frankfurt University Clinic was an entirely different story. The as yet unspoken diagnosis seemed to give him sadistic pleasure. He told me rudely with unconcealed disgust that I should pull myself together.

The white-haired, suntanned head physician had apparently been alerted by his assistant and sacrificed his lunch hour to diagnose me then and there. As we walked to his office, he observed my weary, shuffling gait with professional curiosity. His enjoyment of his own profes­sional elegance was apparent as he examined my limited mobility. My feelings toward him consisted of collegial sympathy and admiration at the same time. He reminded me of myself, striding peripatetically back and forth, through a lecture hall, publicly dwelling on my thoughts. When he asked me to use my left hand and imitate a person screwing in a light bulb, all I could produce was a helpless tremor. Even a gentle push on the shoulder to test my equilibrium threw me completely off balance. I was incapable of touching the tip of my nose with my index finger on the first attempt. “My younger colleague was correct,” he said. “You are suffering from Parkinson’s dis­ease beyond any doubt.” He dismissed my request that he at least take a look at the x-ray, pointing out that in cases of Parkinson’s x-ray images are diagnostically inconclu­sive.

Acclaim for Helmut Dubiel's Deep in the Brain (German edition)

“This is not just the story of a man suffering from Parkinson’s Disease. On the contrary, its author uses his disease as a means of reflecting upon the brutal causality of life, and upon the existential vulnerability and the need for protection that are its consequences. Both, indeed, persist despite much technological advancement, which shows itself to be always a double-edged sword.”
KulturRadio

“A book that begs reflection: on the promises that the constantly evolving medical field offers; on the humanity of a society that refuses to accept pain.”
DIE ZEIT

“Disturbing and at the same time fascinating. But above all magnificently written.”
Frankfurter Rundschau

“How does stigmatization work? What are the limits of medical advancement? How do healthy people behave towards unhealthy people? Dubiel provides his readers with intelligent and balanced answers to these questions.”
FocusMagazine