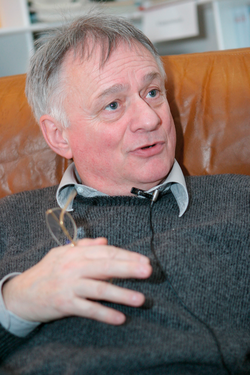 Gerhard Amendt is professor emeritus at the University of Bremen’s Institute for Gender and Generational Research. Since the year 2000, he has been conducting a research project and has surveyed more than 3,600 divorced fathers on their divorce experiences. He has published extensively on relations between the sexes.

About I Didn’t Divorce My Kids!

Amendt’s incisive look at divided families also explores the impact that a single-parent household has on children’s well-being, criticizing the American tendency to over-pathologize normal reactions to familial upheaval. Even the most civilized of divorces, Amendt argues, can cause rage, sadness, potential health problems, and behavioral disturbances in otherwise well-adjusted children. The broad spectrum of experiences recounted in this book will be essential reading for anyone interested in, or personally shaped by, the changing face of the modern family.

Gerhard Amendt
"I didn't divorce my kids.”
How Fathers Deal with Family Break-Ups

For many divorced fathers, separation is a dramatic event that causes them to lose their composure, at least for the moment, and prevents them from carrying on with their everyday lives as usual. A divorce not only touches their private lives, but also affects their professional activi­ties in a conspicuous number of cases. Quite a few of them temporarily lose their capacity to act, succumb to depression, or react to their envi­ronment with inappropriate vehemence.

The way that Martin W. fought to maintain his relationship with his child after his wife left him is therefore all the more impressive. He succeeded in remaining cool-headed, focused entirely on his relationship with the child, and through well thought-out planning was able to use attorneys and judges to further his own interests. Often, other fathers can only hope for what Martin W. accomplished, namely, not to wind up at the mercy of the experts and their opinions, the social service workers and the legal system. There was an additional factor in creating an ideal framework for reordering his private life: he enjoyed the possi­bility of organizing his work in a flexible manner.

Martin W. was born in 1958. He is a senior executive of a major corporation with offices across the world. At the time of his separation, he and his family were living in Turkey, where he was one of the com­pany’s key representatives. Martin W. had been married to his wife for eleven years. The couple had been separated for two and a half years. Their daughter is currently ten years old. Today, Martin W. lives with his daughter in Cologne, while his ex-wife has returned to Turkey together with her new husband, who precipitated the separation.

To this day, Martin W. cannot understand what caused his then wife to terminate a relationship that—in his words—was functioning well.

“What particularly upset and hurt me is the way my wife carried out the separa­tion. And that to this day I actually don’t know precisely whether there was some other reason for the separation, other than the fact that she had met someone else. To keep things simple, I’ll refer to her as “my wife” and leave off the “former,” that only gets in the way. We ran into hard times where I was posted back then. I was an executive at an international corporation that was headquartered in Turkey. That was a tough period. I was working almost around the clock because my boss was sick. I was, as they say, second-in-command at the corporation. And at some point my wife told me that she abso­lutely had to fly back to Germany because she had a gynecological problem that they couldn’t straighten out in Turkey. So then she flew back to Germany with my daughter. I mean, our daughter. After she’d been in Germany for nine days—we spoke on the phone ever}-day—she told me to leave the fax machine turned on in our private apartment. She wanted to fax me something. The next day a five-page letter arrived from a lawyer I had never heard of, informing me that my wife intended to file for divorce. Extensive alimony calculations were attached. Well, that was that!”

Even though the separation caught Martin W. completely off guard, and a divorce by fax might have the effect of unnerving even a moderately sensitive man, Martin W. did not lose his footing. He handled the di­vorce similar to the way that he would have addressed a serious problem arising at work. On the very same day he consulted the company psy­chologist and discussed the situation with him. The psychologist rec­ommended that Martin W. fly back to Germany, where the proceedings were taking place, to “salvage whatever there was to be salvaged.”

“Our company psychologist thought my wife’s course of action was fairly scan­dalous and kindly offered to talk the matter through with me. Right from the start, he always said, ‘You have to know what you want. And when you’re con­vinced that you do, throw yourself into it, because you’ll only accomplish what you really feel confident about. And don’t let the legal situation, legal advisers and the like deter you. Even7 case is unique, and you have to clarify what you really want.’“

“So that’s what I did. I flew home, got in touch with my wife from the city where I live—took her completely by surprise—and told her I absolutely had to talk to her. She responded by giving me exactly 45 minutes for us to talk to each other in a cafe. She told me she had no desire anymore to explain what had happened, and furthermore, she had a new partner. [. . .]”